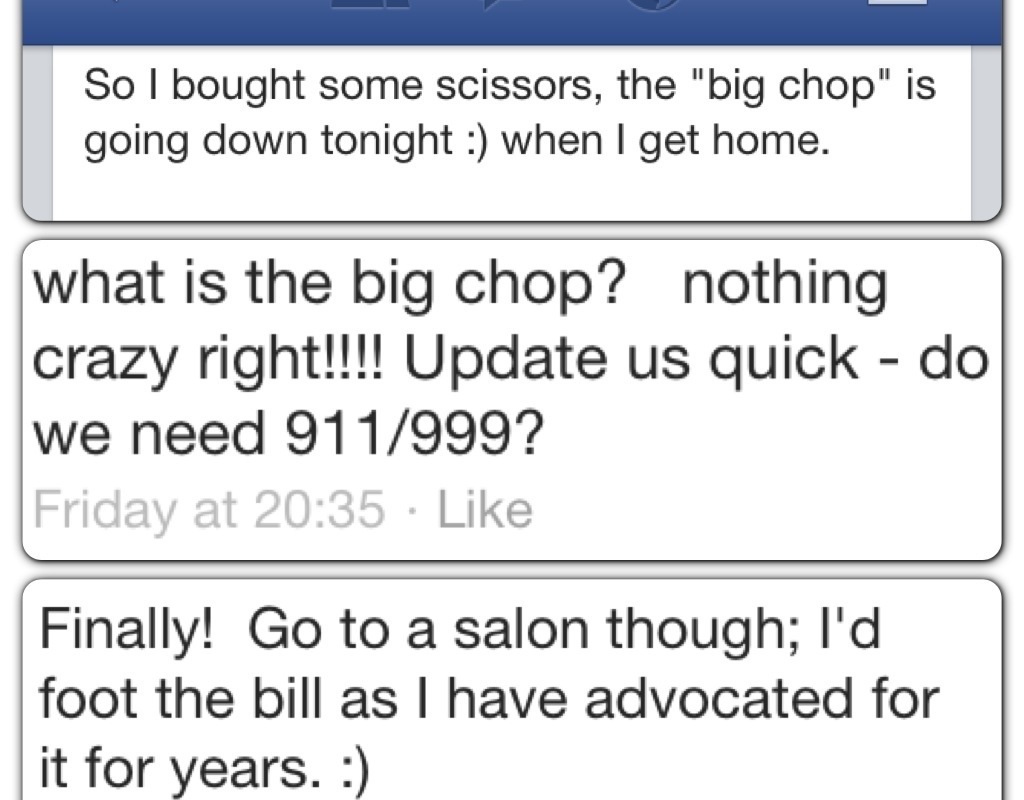 The first comment was from my uncle… I’d just say that posting a status with the words scissors and big chop in it, tends to raise red flags.

The second comment is from my mum. She’s been wanting me to cut my hair for years. It was almost to the point where anytime I mentioned doing anything to my hair, mum would helpfully tack on “…or you could always cut it”.

All in all though, I’m glad I cut it, I think I would have been happier though if I’d done it myself though I had a nice time at the salon, it’s not so much of a mini Afro, as it is a flat top. I look like I could be an extra on The Fresh Prince *sigh* anyway as Clarissa once said after a questionable hair cut, “hair grows”. (or was that Sabrina? Either way I’m pretty sure it was Melissa Joan Hart.) Hopefully two months from now, this style will have grown out into a little ‘fro.

Other things I got done/did on the fourth of May:
Had an eye test (on the third of May I managed to chuck my glasses into a big recycling bin)
Found out my eye sight’s gotten slightly worse
Ordered and paid for new glasses, with the updated prescription
Did some grocery shopping ( not a full shop, just some bits and pieces to tide me over til I move (a moving update post is soon to come)
Watched ‘the omen’ for the first time.
Hung out with my neighbour

Yup, that’s about it really. Keep an eye out for the next post on the big move.

P.s. my neighbour’s really awesome, you know someone is ‘good people’ when you can bond over books you’ve read, have a similar affinity for theatre and anime, and all round enjoy their company.
P.p.s. my neighbour (hereafter referred to a S) has gotten me into Korean dramas. Some of which are based on anime.